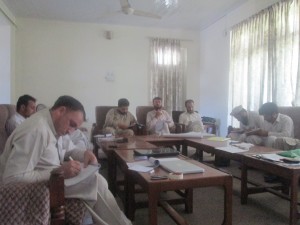 ge Initiatives (FLI) held a 5-day orthographic workshop from 24 to 28 August 2015, for Gawarbati Language Community in Drosh, Chitral, under Small Grants and Ambassador’s Fund Program of USAID to provide the community with a program, comprising of documentation techniques and training for preservation and promotion of their mother tongue.

10 people including researchers, teachers and writers from the community participated in the workshop. The workshop was first of its kind for this language community and most of the participants had not been exposed to such programs earlier, especially concerning to linguistic issues. The objectives of the same were, though not limited to discover the existing SOUNDS, peculiar SOUNDS unique to Gawarbati language. Bringing out especial Characters from the language was another task and how to articulate that Characters into words and also placing Spelling for them.

Gawarbati is spoken in Arandu, Arandu Gol (Ramram) in Lower Chitral and in some hamlets on Afghan side bordering Chitral. Gawarbati language is called in Chitral “Aranaduiwar” and “Kohistani” as well. Earlier, Gawarbati used to be an oral dialect and speakers of this language had never dreamed of their mother tongue to be in written form. This workshop gave them a hope, a confidence and most importantly a way to document their language first then use it as a medium of communication like other languages. The participants were facilitated by Mr. Naseem Haider and Mr. Farid Ahmad Raza. FLI has plans to hold more training programs for this language community in future.