How to stay safe, and protect our dear ones from the Pandemic Covid-19 is explained in the Wakhi Language. Wakhi, an indigenous language is spoken in the Gilgit-Baltistan and Chitral-KP. FLI has developed this message in 15 indigenous languages of the area including Wakhi to create awareness in the communities regarding the disease. Please share our 2nd of the series. 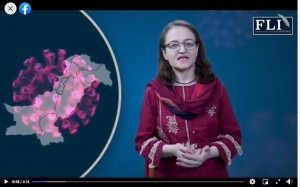 Dr. Elena Bashir
Elena Bashir wrote her PhD dissertation on the Kalasha language in the Linguistics Department at the University of Michigan (USA). During the course of that work she discovered both the many similarities and the differences between Khowar and Kalasha.  Since then (1988) her major research focus has been on Khowar, about which she is working on a reference grammar planned to include a grammar proper, selection of texts, and a glossary. She has spent most of her adult life in Pakistan and has also done linguistic research on other languages of Pakistan, especially in the northern parts of the country. Her main interests are in descriptive and comparative work on the smaller or understudied languages of the country, with the aim of helping to document its rich and varied cultural heritage.  For the past several years she has been teaching Urdu at the University of Chicago (USA).

AnjumanTaraqqi Khowar (ATK), founded by the literary people of Chitral in 1956 is one of the oldest literary organizations of northern Pakistan. The purpose of the establishment of ATK was to provide a platform to Chitrali poets and men of letters so that they could work for the promotion of Khowar language and literature. Since its inception, ATK has held hundreds of poetry recital symposia, workshops, seminars and conferences; and has published around hundred books in Khowar language. Most importantly, ATK has hosted two international conferences: “the 2nd and 3rd International Hindukush Cultural Conferences”, in 1990 and 1995 respectively, in Chitral.   ATK is registered with the government of Pakistan and has 22 chapters (halqa-jaat) in different villages/areas of Chitral, as well as in major cities of the country.

The Forum for Language Initiatives (FLI) is a non-profit research organization based in Islamabad and works for the preservation and promotion of indigenous languages of Northern Pakistan. Established in 2002, FLI has the goal of preserving these languages by building capacity among the people from local communities. FLI is registered with ICT, Government of Pakistan, has its head office in Islamabad and its regional office in one of its target areas, Swat in Khyber Pakhtunkhwa province of Pakistan. It has implemented many multimillion and multiyear projects and has so far covered 20 languages spoken in its target area by having trained thousands of mother tongue speakers from Northern Pakistan in language documentation, multilingual education, organizational management, sociolinguistic research, literature production and advocacy. The organization has turned dozens of purely verbal languages into written form and empowered the ethnolinguistic communities by providing skills, awareness and resources to protect and promote their languages and cultures. Many trainees of FLI are actively involved in preserving and developing their mother tongues. Some have formed community-based organizations and established mother tongue-based education programs. FLI has trained a number of people from the language communities as facilitators. These people further trained and passed on their enhanced skills to other people in their communities, other community people, university students and faculty members

The proposed 4th International Hindukush Culture Conference is an academic and research activity in continuation of the first conference held in Moesgaard, Denmark in 1970.  This conference will commemorate the golden jubilee of the first conference (1970-2020).  The 2nd International Hindukush Cultural Conference was hosted by the Anjuman Taraqqi Khowar in Chitral, in August 1990 with Prof. Israruddin (Chairman, Department of Geography University of Peshawar) as convener and Dr Karl Jettmar (South Asian Institute, University of Heidelberg, Germany) as general president. The 3rd conference was hosted by the same organization with the same convener and Prof.  Dr.  Schuyler Jones (Pitt Rivers Museum, England) as General President in 1995. The 4th International Conference is being convened by Prof. Israruddin on behalf of the same host to give an opportunity for high profile scholars in the field of Hindukush studies to meet and exchange ideas about their research.  The conferences brought together national and international schoolers.

Chitral town has hotels ranging for all kind of budget. Details of the hotels will be provided later. Government has also removed restriction on foreigners to travel to Chitral and nearby regions. Online visa facilities are available for most of the countries while citizen of some countries can also get visa on arrival.  See your country on this link. There are daily luxury bus services from Islamabad/Rawalpindi and Peshawar to Chitral. Pakistan International Airline (PIA) also operates sorties for Chitral twice a week from Peshawar and Islamabad. The conference organizers will establish reception at Peshawar and Islamabad airport to facilitate the conference delegates.
Complete Logistical Information can be downloaded from here