The FLI conducted a six-day workshop in the Hindko speech community called, “Workshop for Planning the Future of Our Language” on April 19-24, 2018 in Abbotabad city of Khyber Pakhtunkhwa province of Pakistan.  In the workshop, four participants from same Hindko speech community, among them two were females, trained as mother tongue facilitators. The main purpose of this workshop was to train MT facilitators from the Hindko speech community to use The Guide to facilitate discussions with representatives in their respective speech communities to increase awareness about language use, develop plans for the future of their language and engage more people in different ways to carry out those plans and achieve their goals. The main objective of this workshop was to equip Hindko MT facilitators to lead a series of discussions and meetings which focus initially on the questions included in The Guide and then continue as necessary in order to carry out relevant plans.A plan was devised to work for strengthen of that speech community for future use of their language.

SAHE and Forum for Languag e Initiatives (FLI) collaborated to organize a roundtable discussion on above topic. The event was hosted in Peshawar and was attended by official representatives from various govt. offices, educational institutions and civil society organizations. The discussion provided an opportunity to discuss the complexities surrounding the implementation of language policy in schools across the province. The event was also attended by a political representative from the KP Assembly who was able to shed light on her party’s efforts towards the promotion and inclusion of local languages in education.

The KP Regional Languages Authority Act of 2012 was a prominent discussion point among the stakeholders who outlined its requirement for the establishment of an authority that would advise on the protection and promotion of regional languages, and suggest ways of integrating their use within the education system. The additional director of the Directorate of Curriculum and Teacher Education (DCTE) elaborated on the efforts by the department to develop curriculum in the five main languages of the region including Pashto, Hindko, Khowar, Kohistani and Seraiki. An authority was constituted for this purpose under the Act, and it provided a roadmap for the phased introduction of these languages to be taught as subjects in primary school. The authority comprised of 2 experts for each language along with relevant department officials who helped in identifying learning competencies for each language.

Advisory committee meetings with large groups of stakeholders were held for arriving at a consensus for content material in local languages. Primers in each language were developed with consensus on the alphabets, which involved speaking to poets, literary figures, community elders and other fluent speakers of the language. The primers were then introduced as part of the first phase while books for subsequent grade levels were introduced in the following phases. This pioneering effort provided a blueprint for the entire process and laid the foundation for similar efforts across all languages. However, there still remain administrative and legal bottlenecks that have caused delays in the overall process.

With respect to the work of civil society organizations in conducting pilot programs in multilingual education, representatives from FLI and Idara Baraye Taleem-o-Taraqqi (IBT) shared the ongoing efforts of their respective organizations that have been successfully facilitating small-scale programs in local languages of the north, for instance in the region of Torwali. Though parents were initially apprehensive, and student numbers dwindled during implementation, parents came around once these students were placed in English medium schools for higher primary grades, and they outperformed children that had been in an EMI system from the start. Parental attitudes towards the inclusion of local languages are improving now that some evidence for improved student outcomes has been documented. However, there is still a need to generate wider and more stringent research in this field, particularly through engaging in longitudinal studies. For convincing the various stakeholder groups, there is a need to invest in pilot programs in local mother tongue based multilingual education systems (MTB MLE).

The MPA from Chitral shared that as of now, language in education has not been an area of priority for the political party in the region (PTI). She urged for the attendees to streamline their efforts and maintain a continuity in discussions so that the language issue remains a prominent part of the education agenda. She also advised for creating clarity about the roles and responsibilities of the authority so that they can be held accountable for implementation. Attendees also suggested the MPA to take up the mandate of an inter-provincial language caucus that allows policymakers to learn from efforts across Pakistan and to consolidate a reform agenda for language policy. The central issue for all stakeholders as of now is the absence of an appropriate language policy which is a set of changing plans man. The director of the Pashto Academy informed the attendees that their academy is working towards preserving other languages as well, and is especially trying to assess where new orthographies can be developed along the lines of existing language frameworks in Pashto.

Attendees urged for the need to acknowledge that language is a political issue, and the dynamics between dominant and minority ethnic groups affect language policy. Though more than 24 languages are spoken in KP, only Pashto and Hindko have dedicated language academies that are furthering works in the language. In order to bring about reform in language policy, policymakers must be sensitive towards different language groups and divert resources equitably towards the development of languages. Secondly, teachers must be facilitated to be deployed in linguistically relevant areas where they speak the language of the community. For the most part, the geographical distribution of northern areas is such that rural areas are largely linguistically homogenous, therefore teacher deployment must leverage geographical similarities in  communities and appoint relevant teachers for different communities. 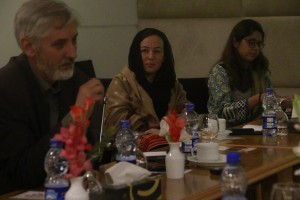 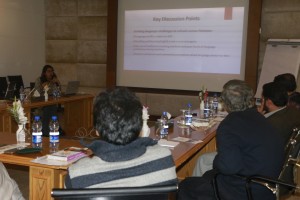 It is encouraging to see that the Universities of Pakistan have started taking the subject of linguistics in a positive manner. The Air University Islamabad, a reputable institution in the private sector is working ardently to strengthen its Linguistic Department and has been organizing training workshops to enhance the capacity of its faculty members in certain areas. More fascinatingly, FLI helps this university in its endeavors by helping it equip its students and faculty through training workshops.

We take the pride that one of the FLI’s trainees; Mr. Afsar Ali Khan has been facilitating a series of trainings on Phonetics & Phonology in the Air University assisting the participants to understand the very technicalities of the theme. His participants included not only the students but a number of faculty members, from the various universities also attended the training. 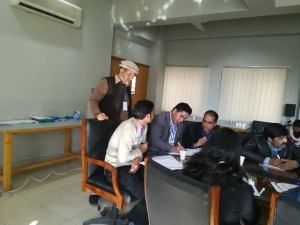 The week long SUM workshop was organized in Nov 2017 for Khowar, one of the six languages in GB. This language has been in a long contact with Burushaski and Shina in the area and very prone to lose its critical domains as the later languages are relatively vigorous in the spoken field. Given the multicultural outlook of GB, the Khowar language adds to its language diversity and steps to strengthen this language means a lot to the people of Ghizar.

The people who were trained in this workshop are called Mother Tongue (MT) Facilitators who, at the end of the training prepared a plan to increase the use of their language in the spoken area. They got to know that unless a language is spoken by all age groups, especially the children in a community that will lose to other languages. Making the language a good part of ones’ identity gives strength to the language. And, finally the important step to take is to fill the language with literary work. It’s hoped that the new activists from this area will play their role in mo 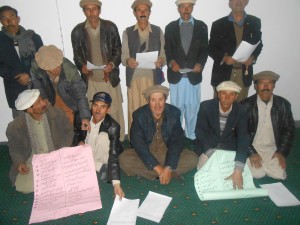 bilizing the community as, for now they are capable enough to confront the challenges the Khowar language is facing.

FLI held this orthography workshop for the Wakhi language in the last quarter of the year 2017 in Passu, Hunza- GB with the objectives of discovering the unique sounds exist in the language, the characters to describe such sounds, orchestrating alphabets and resolving other orthography issues aiming to develop a systemic writing system with the consent of concerned community.

Wakhi is spoken in the sparsely populated upper portions of four of the northernmost valleys in Pakistan: Hunza (Gojal), Ishkoman, Yasin, and Yarkhun. The latter is located in Chitral District while the others are in the Northern Areas. The total number of Wakhi speakers is estimated to be between 7,500 and 10,000. FLI has the objective to flatten the orthography disputes among many groups within the communities by collaborating with community members so that not only our main goal of language documentation could increasingly be achieved but also the confusion faced by young writers with regards to adopting any standardized writing system detached amicably. 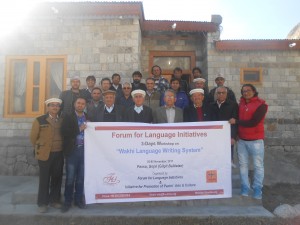 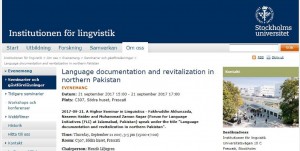 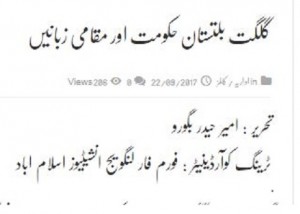 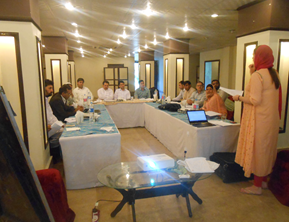 FLI arranged a training workshop for its facilitators to provide them with more opportunities of learning and enhancement of their facilitation skills. The three days long workshop concluded on 12 Apr 2017 which was attended by 15 people who have been facilitating various training sessions at the platforms provided by FLI.

The main goal of this workshop was to improve the facilitation skills and standards of those who facilitate FLI trainings, while also introducing them to and receiving their feedback regarding the new Facilitators’ Guidelines and Training Policy that FLI is developing. This was accomplished through a 3-day workshop held at local hotel in Islamabad.

The methods and processes of achieving this goal included both explanations of good facilitating practices as well as a lot of practical activities and practice using those methods. The objectives established towards achieving the goal of this workshop were:

FLI for the first time, with the partnership of Payap University, Thailand, was able to offer a year-long course to any of its language development trainees that provided a certificate from an accredited international university. This was very valuable partnership FLI has had in its history which enhanced organizational management skills of the participants. 12 participants from eight language communities; three from south and nine from north Pakistan benefited from the program.

The main objectives of the 13 credit course, among many were:

The certificates were awarded to the trainees in Islamabad on 12 Apr 2017. FLI also distributed experience certificates among those who facilitated the course while the services of our Language Consultant and Training Coordinator were appreciated and honoured by presenting them shields from Executive Director of FLI.

In line with the objectives of the workshop the participants have agreed to allow a child to grow strong and healthy. They had discussion on CRC (Convention on the Rights of the Child) and identified the main issues in their communities. They also generated ideas to disseminate information in that regard. Building the capacity of participants who were teachers, supervisors and coordinators in the protection of child rights was the main purpose of the workshop; getting deeper understanding of concepts of abuse, causes and consequences. Identification of signs of abuse, and learning of key techniques to protect their rights were imparted. How to empower children and how to advocate for their rights were what the discussion covered. 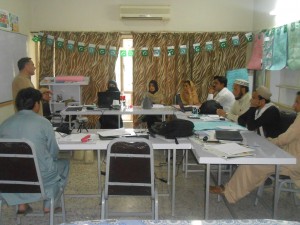 Executive Director of FLI Mr. Fakhruddin giving his input in one of the sessions during Child Rights Protection workshop