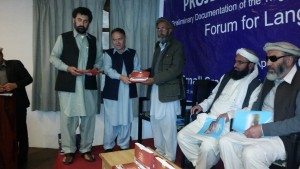 FLI has published eight books, two in each of four languages indigenous to northern Pakistan. The four extremely endangered languages, of which three are spoken in district Chitral, had previously been used only for oral communication, but have now successfully been provided with a writing system under a USAID-funded documentation project.

Yidgha, Dameli and Gawarbati, spoken in different valleys of the district of Chitral, and Ushojo, spoken in Swat, have joined the ranks of languages being used for written communication. These new books contain bilingual word lists and alphabets, all the information necessary both to begin using a language for written communication and to document a language for preservation purposes.

Under this project, FLI selected two people from each language community to train in language documentation and development principles. These individuals then later  held training workshops in their respective communities and trained an average of ten people per community, enabling each community to effectively document their language. Together with support from the wider language communities, research was initiated to identify the unique sounds and elements of each language, develop their alphabets, collect folktales reflecting the rich heritage of each language’s culture, and then publish the resulting work in both written and audio formats that can be used by these communities for generations to come.